Oh, the Shandy (p. 53). Something about the shandy just doesn't sound delicious to me. I mixed lager (I choose delicious Miller High Life, the Champagne of Beers) with ginger beer: 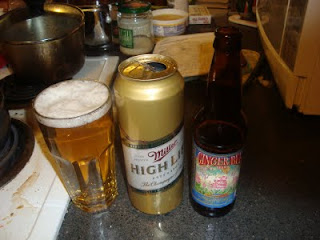 Josh had to drink several of these, since it seemed like a waste to throw the extra ginger beer and MHL away. He actually rather liked the shandy. He thought the MHL leveled out the odd flavor of the ginger beer. I thought it was awful, which is likely due to my hatred of ginger beer. Apparently you can also use Sprite in a Shandy which sounds even more awful to me.

While Josh was enjoying his shandy, I made him an English muffin pizza (p. 182).

I took an English muffin, toasted it in the broiler, spread it with chili sauce (you can use catsup--CATSUP!), sprinkled oregano on it, topped it with grated cheddar, poured olive oil over it, and popped it back in the broiler: Believe it or not, Josh said it was good and he'd happily eat it again. He thought it needed a little extra "punch" like a couple of pieces of pepperoni or bacon but he thought it was overall rather tasty. I will say it was certainly easy and made out of stuff we already had on hand, which was nice.

Random facts:
So, readers, have you had a shandy before? What was the mixture?

Email ThisBlogThis!Share to TwitterShare to FacebookShare to Pinterest
Labels: sandwiches wraps and pizza, Wine and beer