I actually had heard from multiple people that the Sweet-and-sour brisket (p. 481) was one of the best recipes in TJOC. And, yet, I wasn't excited at all to try it because it didn't sound very good to me. I stumbled upon a really cheap brisket at the grocery store and thought it would be the perfect time to try out the recipe I had heard so much about.

I browned the brisket (which had been spread with minced garlic and black pepper). While that was happening, I scattered sliced onions around the meat. I cooked the dish until the onions were very brown and then added red wine and beef stock. After a minute I scraped up the browned bits from the bottom of the pan and stirred in chili sauce, cider vinegar, brown sugar, and a bay leaf: 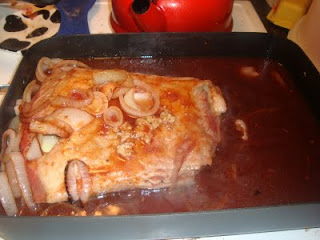 The whole thing went in the oven for almost 3 hours. 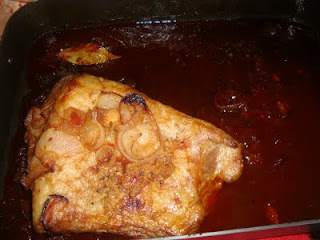 The brisket was allowed to cool in the pan and then popped in the refrigerator overnight. The next day I removed the bay leaf, sliced the meat, returned the meat to the sauce, and reheated in the oven (believe it or not, that's in the recipe): 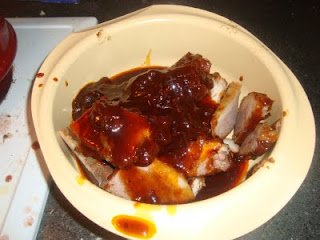 Sorry for the hideous picture (yes. even I know this picture is awful).

The brisket was delicious. Tender, flavorful, and amazing. The recipe makes quite a bit and heats up easily, making it a great option for a dinner in which you aren't completely sure when the guests are arriving (like when people are traveling in). I made it again for a graduation supper after this original time and it was a hit with everyone. I think the "sweet and sour" title is a bit of a misnomer. The sweetness comes from the sugar and the sour from the vinegar but it's really not that sweet or that sour. Plus it's not Asian-inspired at all, which I always expect from something called "sweet and sour". This is one of those rare dishes that even though most picky would like--the sauce is simple yet full of nuanced flavors. Make it the next time you have a brisket!

Email ThisBlogThis!Share to TwitterShare to FacebookShare to Pinterest
Labels: meat