Eggs in a nest (p. 199) is a truly strange recipe. I stumbled upon a similar recipe in "Silver Spoon" which is usually described to me as being Italy's version of TJOC. I thought--eggs in mashed potatoes? Bizarre. And I still think that. Deliciously bizarre.

I mixed my mashed potatoes, milk, bacon, parsley, and paprika and smeared it in to a greased baking dish: 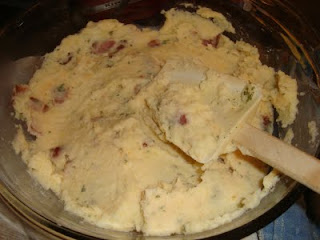 I made four hollows and broke eggs in to them: 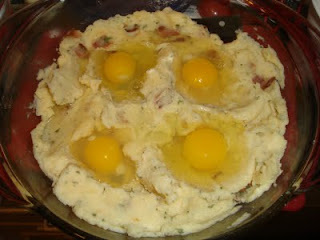 I covered the whole thing with au gratin: 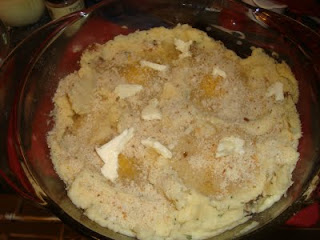 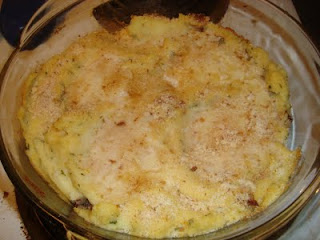 I actually ate one egg out of it at this point, thought the eggs might be a little underdone, and popped the rest back in for a few more minutes. I actually recommend taking the eggs out when they are still runny. There is something delicious about the runny egg yolk mixed with the potatoes. If you are of the mentality that slapping an egg on food makes it better (as people from a number of different cultures are), this is going to be an amazing recipe for you. And the bacon-y mashed potatoes were like ambrosia.