Mom had pork chops on hand so I thought it would be a good to make a sauce and a vegetable to go with them. I really like gravies and sauces but I never make them--maybe it's time to start!

I also noticed that I had never officially made TJOC's pork chops, so I decided to make Pork chops I: Sauteed pork chops (p. 504).

I melted a combination of vegetable oil and butter in a saute pan: 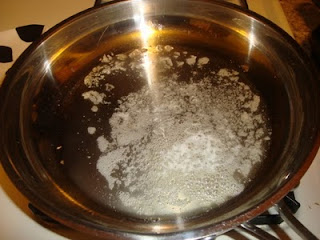 I added pork chops and browned them for a minute on each side. I reduced the heat, covered the pan, and cooked the chops for another five minutes on each side: 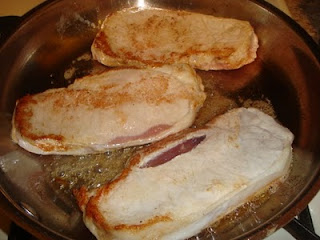 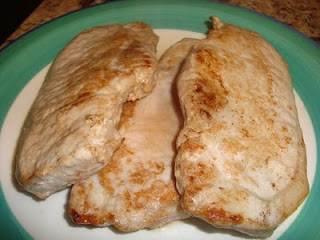 Incredibly easy. This is pretty much a no-fail pork saute recipe. The chops were perfectly cooked and nice and tender. Don't overcook your pork!

I added sliced leek to the fat already in the pan--but there was almost no fat in the pan, so I added a little butter. When you use leeks, make sure to soak them well. They grow in sandy soil and are always dirty. 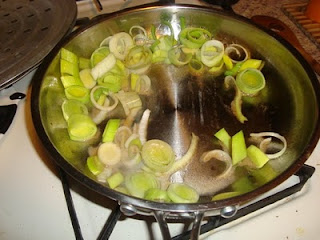 I added orange juice and loosened up all the browned bits stuck on the bottom of the pan: 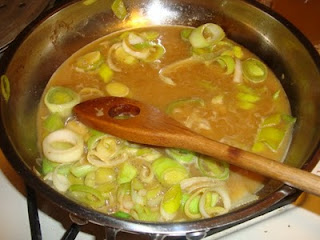 I added chicken stock, orange zest, and rosemary (off of mom's plant) and cooked it down until it was reduced by half: 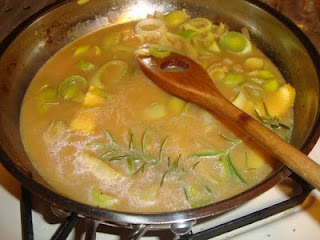 I then added in butter (bit by bit): 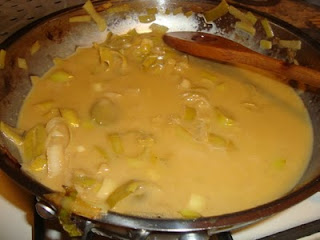 And poured the sauce over the meat: 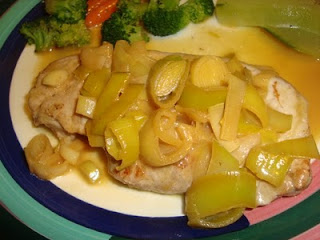 Neither mom or I were particularly impressed by the sauce on the pork. It was good but it didn't seem that special. I only stumbled on the wonder of the sauce when I started mopping it up with bread. It was sooooo good with the bread--buttery, delicate, delicious. It is an incredibly delicate sauce and couldn't stand up to pork--I don't think it could stand up to any red meat, it needs something with less flavor of it's own. Maybe chicken or fish?

I had stumbled upon the mother lode of cucumbers on the grocery store discount cart. I got seven cucumbers for $1! Perfect time to make Cooked cucumbers (p. 273). I've eaten a lot of cucumbers in my life and never had them cooked. Has anyone had cooked cucumbers?

I sliced the cucumbers lengthwise and boiled them for about five minutes: 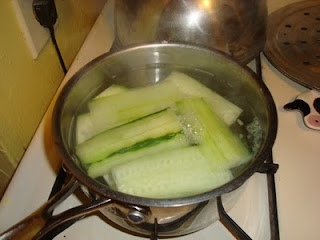 I then seasoned the cucumbers with parsley, salt, pepper, and butter: 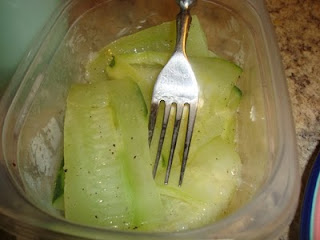 The cucumbers were surprisingly good. They had a nice, crispy flavor. They actually tasted similar to kohlrabi but better. The cucumbers were tender and juicy and the butter nicely complimented them. I think this is a good use for cupcakes if you get totally overran with garden cucumbers in the summer.