There are certain recipes that I'm just not excited about at all. Essentially all of the variety meat recipes fall in to this category. Like most Americans, I don't like organ meats and, in our house, the only ones to regularly eat them are the dogs. And even my dogs don't like most organ meats (they are finicky). Rachel pointed out that we should probably make something, though, since I had yet to make a variety meat (and there are quite a few recipes that require them).

I figured that Baked stuffed heart (p. 520) would be the perfect test of the adage "bacon makes everything better".

Beef heart is cheap. Big and cheap. So if you are low on money, heart is a good way to go. I placed bacon on the heart and poured stock into the bottom of the pan: 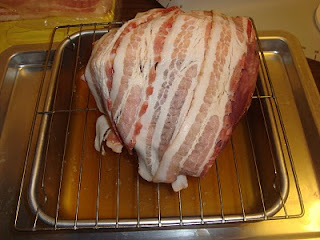 The whole thing was covered in foil. It was at this point that I realized the heart had to cook for 3-4 hours. That really was something that would have been really, really good to know before starting the recipe. Of course, because I didn't thoroughly read the recipe, we started making the heart around 6 pm. I also found out that Rachel does not have a roasting pan. She has a big electric roaster but we were using that for the duck (in an upcoming post). We rigged something up with a cookie rack, a baking dish, and foil. Apple dressing (p. 537) is a very strange stuffing. I'm used to stuffings (dressings) that include breadcrumbs and, when moistened and/or cooked, hold together in some way. Apple dressing was not an example of this.

I combined apples, raisins (Rachel, a raisin-hater, had raisins on hand from last year's Glogg), lemon juice, brown sugar, sage, and a little salt and pepper: 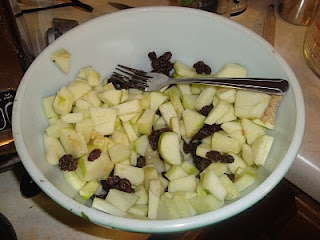 The whole thing. Nothing else. Nothing to make it stick together in any way. And, actually, on re-read, I notice that it says "sliced" apples, not "diced" apples, so it would have stuck together even less. It reminded me of a really boring fruit salad.

We shoved it in the heart, which wasn't easy. Three cups was way, way too much and it kept falling out. 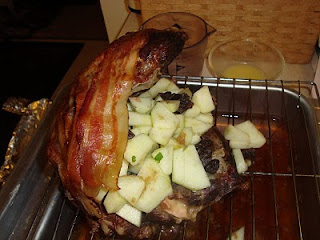 It was all cooked for about fifteen minutes: 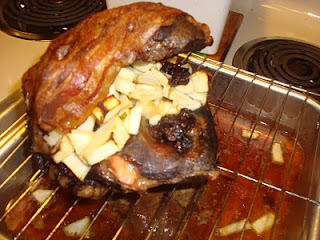 The texture was totally different from skeletal muscle meat: 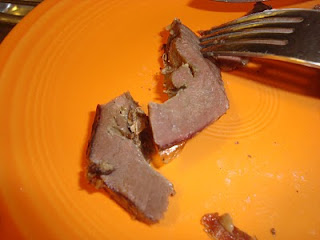 Rachel was optimistic that the heart would be good covered in bacon with the stuffing sandwiched in the middle: 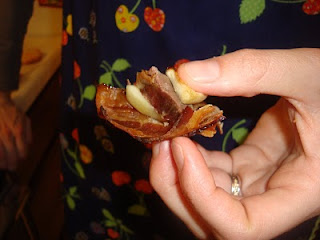 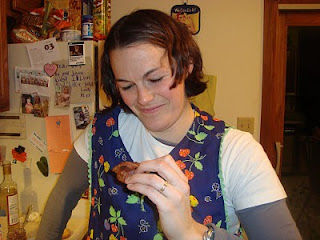 I don't know what to say about this recipe. It wasn't nearly as bad as I expected. Really, my only experience with organ meats is from time spent in other countries (I ate a lot of intestines in Japan) and I didn't know what the heart would taste like. When I read journal articles about offal, they usually describe beef heart as "beefy" and it certainly was. It tasted like concentrated meat--not a great description but as good as I can do. It also had a sort of metallic taste. The bizarre dressing complemented the heart really well. The texture was totally different from skeletal muscle too. I think I would have liked it if I had grown up eating it but the texture really put me off.

We both ate a small slice and called it a day.

Fun facts about this post (if it's not referenced, it's my personal thought):