I am on a ROLL tonight! I have written four blog entries already--make sure to read them! Josh and I went to the grocery store early Monday morning to get ingredients for my day of obsessive cooking. We always search the sale sections and found some nice tilapia on sale. I thought it would be perfect for lunch.

The recipe was very simple. Looking at the picture and comparing it to the recipe, I apparently didn't read thoroughly before starting because I spread butter on the fish but didn't melt it. I seasoned it with salt and pepper. 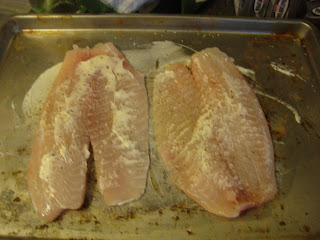 I popped the fish in the oven and started it cooking. It seemed to be taking an abnormally long time to cook. TJOC said that the fish should only take about ten minutes and it was taking much longer. I mentioned the issue to Josh and he said "even though you are broiling it?". I told him no, I was roasting, and I looked at the oven again. I WAS broiling rather than roasting (door open rather than closed) because I had gotten confused. ::sigh:: I shut the door and roasted the fish for a couple more minutes. It turned out well. 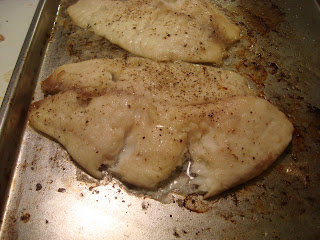 I will admit, I had an ulterior motive for making fish. I wanted to make the White wine sauce for fish (p. 552) because it was an option on the randomized list.

The sauce was extremely easy. I made a white sauce in one pot and a white wine/chicken stock/bay leaf/cloves/peppercorn/shallot mixture in another pot. 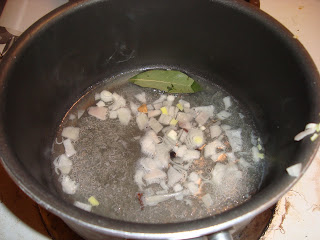 I actually made that combination twice. I was supposed to reduce it by half but it evaporated really quickly and I reduced it to near nothing the first time.

I added the reduced wine mixture to the white sauce: 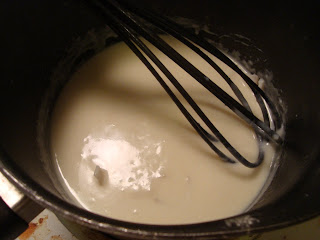 And over the fish it went: 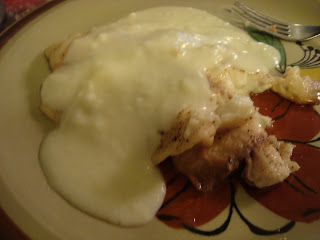 It was extremely good! The fish had a nice texture and was nice and buttery while the sauce had a terrific texture and a nice wine flavor. The recipe was extremely easy and could be easily dressed up for a more impressive presentation.
Posted by Jessica at 5/25/2009 11:56:00 PM