I had pork in the fridge and searched TJOC for the perfect recipe--Caribbean red beans with pork (p. 255) seemed perfect. Of course, every time that you consider making a bean recipe, build in time to soak your beans (unless you use canned beans or use a quick soak method). I soaked them overnight. Dried beans are amazingly cheap so if you are running into money problems, beans are cheap and easy. 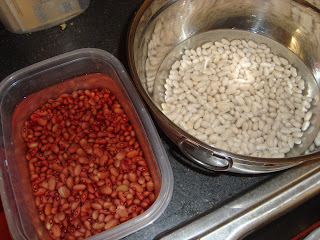 The red beans were combined with water, an onion, a "leafy celery top" (weird!), a bay leaf, a garlic clove, and a cinnamon stick. A cinnamon stick--uh oh. I really don't like cinnamon. It's always concerning when I see it used in recipes--especially savory recipes. 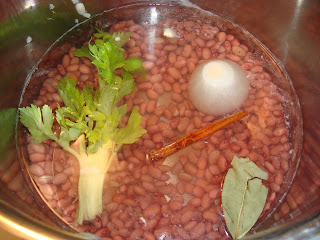 After cooking for an hour and a half it looked like this: 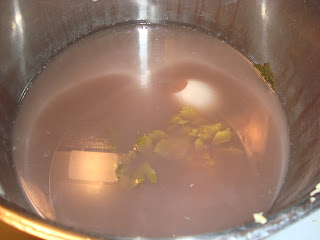 Muddy! Not too appetizing. The beans were drained, the vegetables and bay leaf thrown away, and the cooking liquid was reserved (and I actually read that before tossing it down the drain!). It smelled strongly of cinnamon--not a good sign. 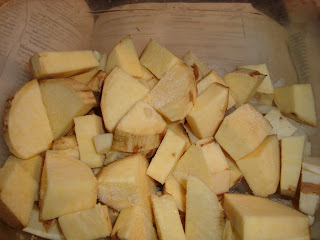 I sauteed a pound of pork (I cubed some chops) and then added the sweet potato (one sweet potato was about two cups worth), an onion, some garlic, and some salt (I omitted the peppers because I don't like them), eventually adding some paprika. 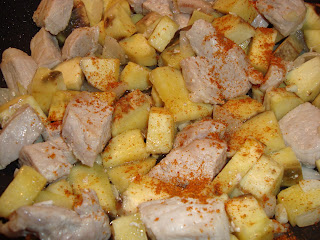 The beans and reserved cooking liquid were added to the pork mixture and it was simmered for about an hour. 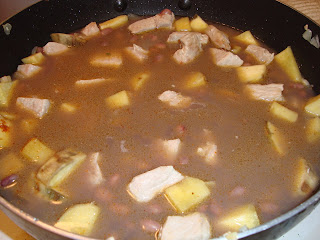 How was it? Really good! The cinnamon wasn't overpowering and I love sweet potatoes and pork. I really wished I had made some rice, because it would be particularly good over rice. TJOC says that the recipe is a good way to stretch a little bit of meat--with rice it would be even better.

I wanted something quick for lunch, while the red beans were cooking. Quick might be a misnomer because I did decide to make it the day before--otherwise the beans wouldn't have been soaked. I settled on Mediterranean white bean soup (p. 133).

The beans were simmered for two hours with rosemary, a ton of garlic, and water. 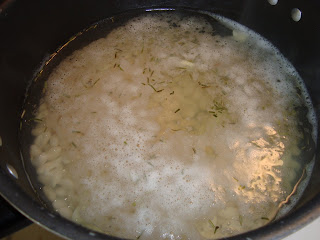 Tomatoes, parsley, olive oil, red wine vinegar (how many types of vinegar do you have? I have about a half dozen and could use more), salt, and pepper were added. 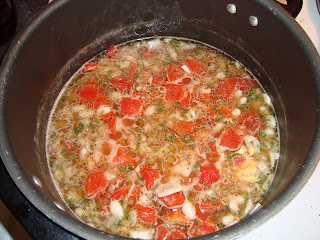 And it was done! It was extremely good. But very very garlicky--I think I sweated garlic the next day. It was one of those perfect mixtures of flavors, really tasty. I will definately make this again. The recipe only makes about two servings though, so keep that in mind if you make it.

I had a pint of strawberries so it seemed like a good idea to make something out of TJOC. I chose Fresh strawberry variation IV (inspiring name, right?). Number four is pretty much just strawberries tossed with balsamic vinegar (no specified amount) and topped with creme fraiche or sour cream (I went with sour cream). 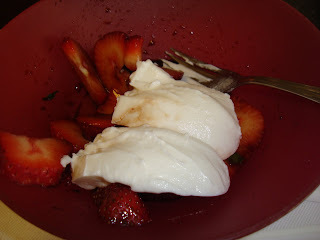 Delicious! It was a terrific day of recipes--everything was tasty! I love balsamic vinegar and the tang of the vinegar with the sweetness of the strawberries was amazing. I can't recommend this enough (if you like vinegar, otherwise choose against it). Actually this was one of those combos that I saw on Top Chef and wondered about!
Posted by Jessica at 5/12/2009 11:57:00 PM