I have had the Sausage and mushroom strata (p. 98) on my "to-make" list for months but somehow never actually made it. I decided it was the perfect time to cross one of the stratas off the list.

I know what you are thinking--what the heck is a strata? A strata is essentially a savory bread pudding. TJOC points out that they can be assembled one day and baked the next, making it a perfect recipe for a brunch or lunch when you need a big meal and don't want to be in the kitchen cooking all day.

The recipe is easy. First, I browned a pound and a half of sausage. TJOC doesn't specify the type of sausage, so I used half Italian sausage and half breakfast sausage. Mushrooms (both button and shiitake) and some onions were added and it was cooked for about fifteen minutes. 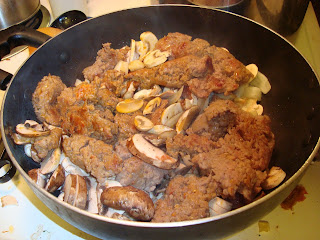 I then cut up a loaf of bread and shredded a ton of cheese. Half of the bread was spread in a 13x9 pan (buttered, of course). I started to get concerned at this point--every time I bring out the 13x9 pan I get nervous. It's so big! It always produces WAY too much food for the two of us. 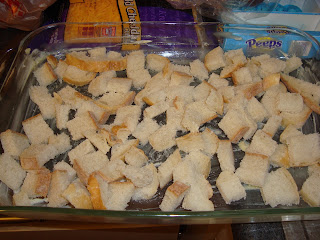 The sausage mixture and most of the cheese was layered on the bread. 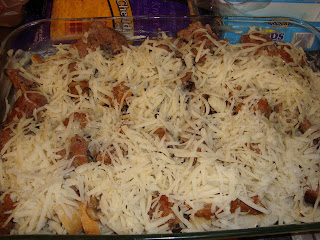 The remaining bread and cheese were then layered on top. Milk, eggs, salt, and black pepper were mixed and then poured over the top. I actually kept this in the fridge overnight and baked it the next day, although you can let it soak for as little as two hours. 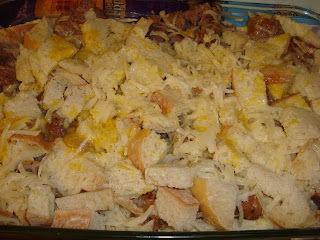 It was then baked for 45 minutes. 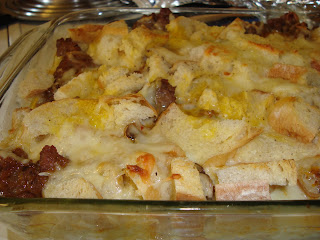 How was it? I'm very conflicted about this strata. I think it was tasty and I liked the toasty taste of the bread on top. That being said, it made an ENORMOUS amount, so I would half it if I made it again (and will probably half the other two TJOC stratas when I make them). I'm so used to sweet bread puddings that it was a little strange for me, but Josh liked it. So if you like bread puddings, sausage, and mushrooms, give this recipe a try. If you don't like bread pudding DO NOT make this recipe, you will not be happy.
Posted by Jessica at 5/11/2009 12:47:00 AM