When I'm at my mom's house I always try to make at least one recipe that I know mom would like but that Josh or I wouldn't like. Spanish omelet (p. 201) was definitely a recipe on that list because I don't like one of the main ingredients (bell peppers).

I sliced potatoes (straight out of my dad's garden) as thinly as I could manage. I submerged them in a half cup of olive oil (a HALF CUP? Is TJOC kidding?) and cooked them for about 20 minutes: 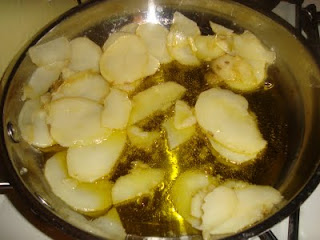 At the same time, I cooked onion and bell pepper (yellow and red, we didn't have green) in a little bit of olive oil for 5 minutes: 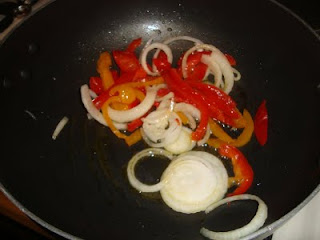 I then added garlic, tomato, and salt and pepper: 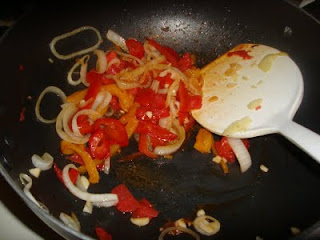 The whole thing was cooked for another 15 minutes. I added the potatoes: 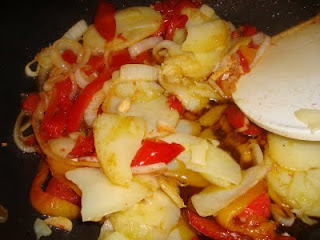 It smelled amazing at this point--and I don't even like peppers! So it was on to the French omelet (rolled or folded) (p. 200). I melted butter in a pan. In a bowl, I beat eggs, salt, and pepper together until it was a uniform color. I poured the egg mixture into the hot pan: 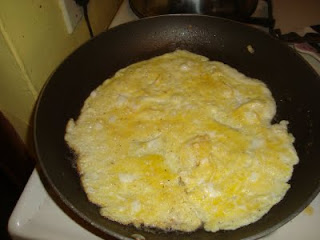 This was all so stressful it was almost impossible to take pictures. I had to continuously shake the pan while swirling a fork around the eggs so it could cook through (you don't flip it). I then put the filling in the omelet, tilted the pan, folded one end over, and then tilted the pan more, and folded the omelet the rest of the way, resulting in a rolled omelet: 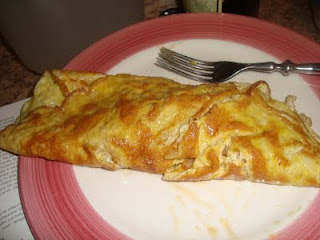 That was my first try, so it was a little overcooked. Okay, it was a lot overcooked. I know the omelet shouldn't be so brown (or brown at all). You have to move really fast while making these omelets and have everything ready from your utensils to your plate.

I have to say, learning to make an omelet has been on of the greatest things I've learned from TJOTJOC. Until this project, my omelets always looked like scrambled eggs with stuff in them. Now, they are obviously omelets. With a little more practice I think I could make impressive omelets and that thrills me! I filled my omelet with sauteed mushrooms and garlic and it was delicious, too. Mom said that the Spanish omelet was incredibly good--the flavors melded really well together and it was the perfect choice for summer, since it was so vegetable-y. My recommendation would be to use less oil, because there was way, way, way too much olive oil. The omelet filling was swimming in it.

Email ThisBlogThis!Share to TwitterShare to FacebookShare to Pinterest
Labels: egg dishes, Round 1, vegetarian