Summer is usually full of overproducing vegetable gardens for many people. Those people (often totally sick of most of the vegetables growing at such an alarming clip) are usually willing to share, often leading to me having a lot of vegetables (a great problem to have!). Mom had a bunch of cucumbers and was getting a little tired of them. I thought that Creamy cucumber salad (p. 167) might be a nice step off the beaten path.

I tossed sliced cucumbers and salt together in a colander and let it stand (and drain) for almost an hour: 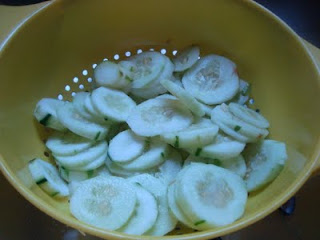 I pressed the cucumber but didn't rinse the salt off (which seemed very strange). I added sour cream and lemon juice and tossed it: 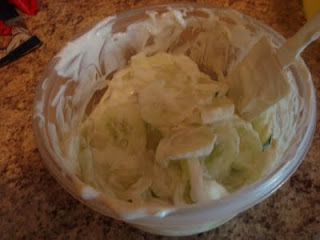 At this point I sprinkled a little basil on the top and it was finished!

This was easy and surprisingly good. The saltiness cut the acidity in the sour cream nicely. It was different than my normal preparations for cucumbers. I really recommend this recipe when you are at the point of summer where you can't imagine eating even one more cucumber.

I have to say, I hate draining cucumbers. Does it really make that big of a difference if you don't? Does anyone know?