I hate Waldorf salad (p. 169). I always have. In fact, I hate it so much that it amazes me that anyone likes it. But people must like it because it's everywhere.

Like all Waldorf salads, I mixed celery, apples, walnuts, and grapes with mayonnaise. *Gag* 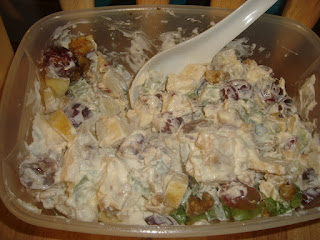 Why would anyone voluntarily eat fruit covered in mayonnaise? Look, I like mayonnaise, but that's just going too far. TJOC recommended that you can include marshmallows too--that's horrifying. It tasted just like it looks--crunchy things covered in mayo. If you like Waldorf salad, I would love for you to explain why in the comments. Please.

Texas caviar (p. 73) is one of those items that I had seen on menus before but never ordered. To be honest, I had no idea what was actually in it. It turns out that I don't like real caviar and I don't really like Texas caviar either. 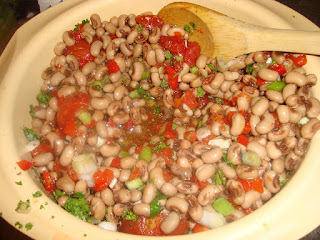 This recipe makes a TON of food so make sure you have a crowd. I don't really like bean salads but it was a pretty solid salad if you're into that. The vinaigrette really soaked into everything and it was nicely flavored. This is one of those dishes that gets better the longer it sits so if you are going to make it for a party, make it a day or two early.

Carrot and raisin salad (p. 166) is a strange recipe. I combined grated carrots, raisins, pecans, lemon zest, lemon juice, salt, and pepper, and tossed that with sour cream and mayonnaise: 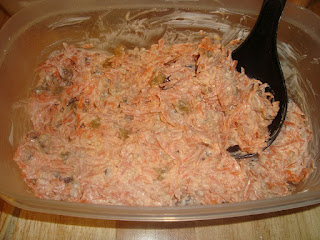 It was certainly a simple recipe but, again, I don't understand all the mayonnaise love in the salad chapter of TJOC. I don't really like raisins in savory dishes but that's a personal thing. It was a sweet salad and it would be a good choice if you were going to a potluck and wanted to bring something a little different.

Rosemary pecan butter (p. 179) sounded interesting. I kind of like the idea of savory nut butters (yeah, yeah ::insert innuendo here::) as a spread that's a little different than the norm and I really like rosemary. 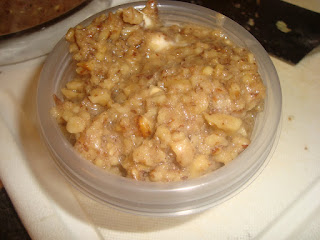 Certainly easy. It was good. The rosemary went really well with the pecans. It was particularly tasty on my bagel the next day. I always have trouble with spreads because I can never tell exactly what you are supposed to spread them on--crackers? Bread? Veggies? I think I overthink these things.

Email ThisBlogThis!Share to TwitterShare to FacebookShare to Pinterest
Labels: appetizers and hors d'oeuvres, Round 1, salads, sandwiches wraps and pizza, vegetarian