I'm not sure why I decided to make Quick turkey tetrazzini (p. 96) (see a theme over the last couple of days?). We had plenty of food and I was leaving for Iowa and then Florida in a week (so I didn't need much in the way of food in the house). I liked the (not quick) turkey tetrazzini that I made a couple of months ago.
This quick recipe pretty much substitutes Cream of Mushroom soup for making the sauce from scratch.
I mixed the cream of mushroom soup and chicken together. I then mixed in the cooked noodles: 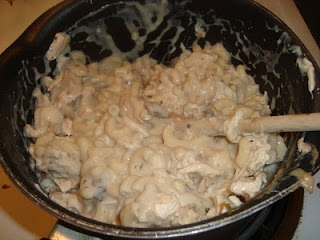 It all went in a buttered dish, with Parmesan cheese over the top: 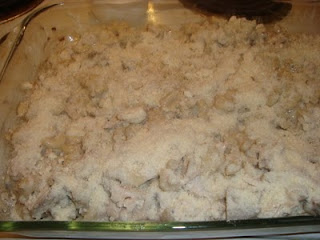 The casserole was popped in the oven: 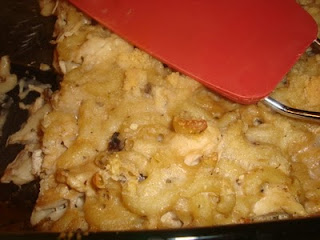 Tasty! In fact, I think it was better than the longer version--it was certainly no worse. I like the crunchy topping and think it would be even better with breadcrumbs too. Next time I make this, I might add some cheese to the noodle mixture, I think it would make it more interesting (it's a rather bland recipe). It's amazing how simply switching spaghetti out for elbow macaroni makes this dish so much more appealing to me.
I think this casserole would be absolutely perfect for bringing over for a family who may have just had a new baby or something like that. It's bland enough that I think most children would like it but interesting enough that the parents would like it too. Plus, it's comfort food. Pure comfort food.