I was super-excited this weekend! There was going to be a pet expo at one of the local humane societies (Animal House--it's a great rescue group), although there was also going to be a home football game (the stadium is right next to our house and our road gets shut down--it's absolutely nightmarish and we have a hard time getting in and out of our home). I love bringing Duchess to pet expos so I was really excited.

We managed to get out of the house and drive to Animal House--and it doesn't look like anything is going on. Why? Because the pet expo is the NEXT weekend. Whoops! Josh wasn't real thrilled with me but we did decide to hit up the farm stand in the parking lot. I picked up a few summer squash (both yellow and zucchini), as well as garlic, radishes, corn, etc. I love farm stands! 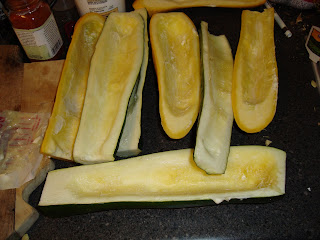 Next, I melted some mutter, softened some onion, and then added the hollowed out squash pulp (hope you kept it and didn't hollow them out into the trash! I read through the whole recipe so I knew not to), as well as salt, paprika, and cloves, and cooked it until it's "hot". I have a hard time working past my view that cloves and nutmeg=dessert and I'm apparently not through my issues yet, because this smelled like a pie to me. After the mixture was "hot" it was removed from the stove and egg, bread crumbs, and cheese (I used Monterrey jack) were added. 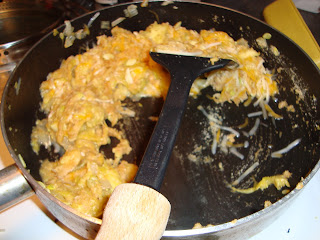 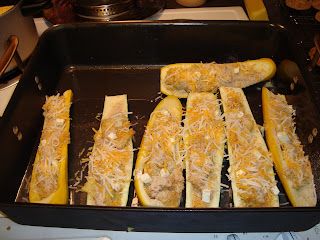 I used Au Gratin III (p. 961) for the topping. The au gratin was easy--I sprinkled bread crumbs all over the stuffing, then some shredded cheese, and then I "dotted" it with butter. Squash and cheese go well together so I used plenty. 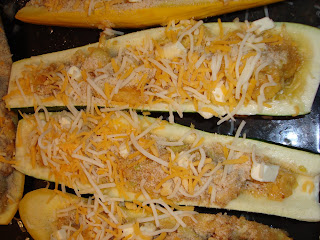 So how were they? Really good although the shell was strangely bitter--I blame that on the actual squash though, not the recipe. They heated up deliciously. The stuffing was great--nice and creamy. They are an attractive side dish and I think they would be really great for a summer dinner party. 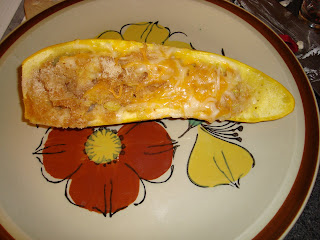 I've been very interested in TJOC's salad dressing recipes but I haven't actually made any yet. Why not? The main problem has been that most of the vinaigrette require a running a food processor while olive oil is slowly poured in (to make the emulsion, I assume)--but my tiny food processor doesn't have a hole in the top to pour through. I'm hoping we get a food processor at some point, though, so I've put them off. Even so, a few of the recipes don't have that step--one of them being Creamy Blue Cheese Dressing (p. 576), which I decided to make.

It's an easy recipe--combine mayo, sour cream, parsley (I used dry!), red wine vinegar, garlic, salt and pepper, ground red pepper, and Worcestershire sauce. Uh oh--no Worcestershire sauce....I used soy sauce instead (it's only 6 dashes and I figure the main flavor that the Worcestershire is giving is a salty taste). I had purchased some beautiful Maytag blue cheese (IOWA PRODUCTS! HOORAY!) at Whole Foods, and that got added to the mix. 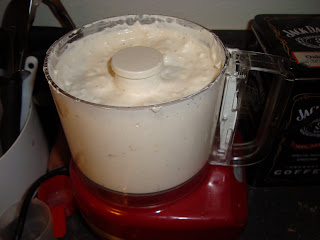 How was it? AWESOME! I can't recommend it enough. It was delicious on salads and wonderful to dip vegetables into (I used carrots, Josh used radishes). The garlic gives the dressing a great bite. I don't think I'll ever by blue cheese dressing again!

I also picked up some green beans at the farm stand and couldn't decide exactly what I wanted to do with them...I knew I wanted to make a TJOC recipe and there are several GB recipes in TJOC (ranging from various salads and casseroles to stir fry). I made Green Beans, Potatoes, and Smoked Meat (p. 251). This is one of the easiest recipes I've ever seen. First, you simmer some smoked meat (I used Canadian bacon) in water (I used chicken broth because I needed to use it up) for thirty minutes. I assume this is to make a tasty, smoky broth. 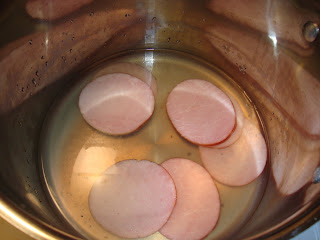 Next, I added green beans and potatoes (Yukon Golds of course!). 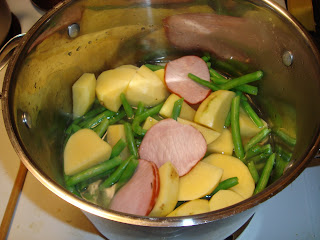 The pot is covered and the mix is simmered for about twenty minutes (less for those of you who don't battle altitude!). They are then drained, the meat is chopped up, and it's ready to go! 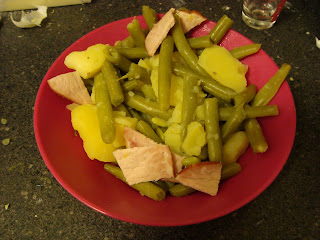 How was it? Wow was it good. (Full discloser, I wrote this entry a couple weeks after I made the recipe and I've made it again since!) It's smoky and salty and the mixture of flavors is amazing. I actually ate this and thought of my father--he would LOVE this recipe and his would be even better because he could use garden-fresh potatoes and green beans (I don't think he has any bacon-plants, Canadian or otherwise). If you like these three items you MUST make this recipe--it's great.

I also made some beautiful chocolate chip cookies, I thought they should be admired :) They were from my own recipe, not from TJOC. 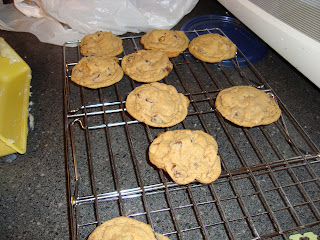